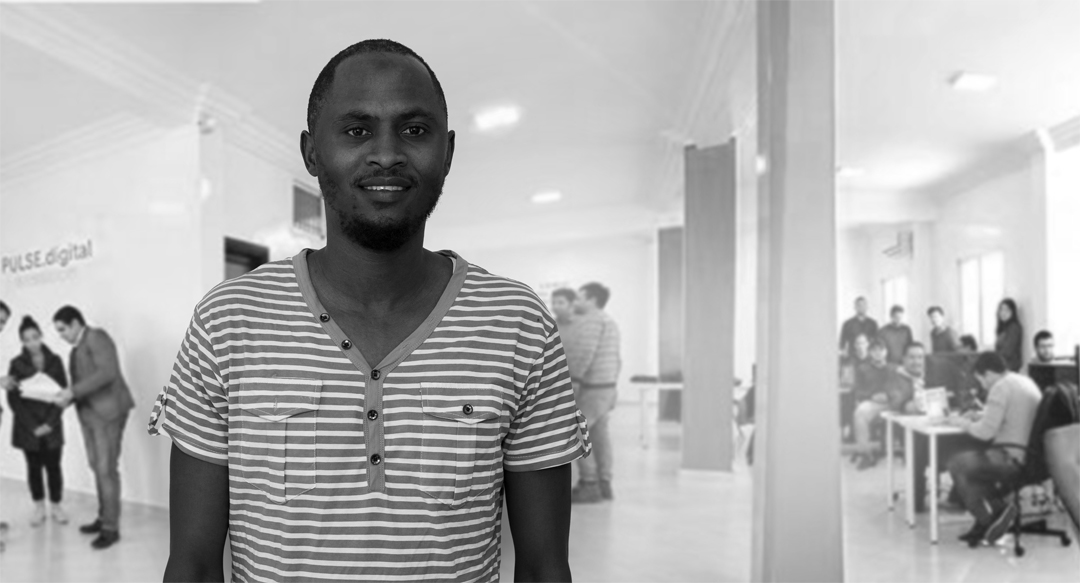 -How did you come in Morocco ?
2005 – i obtained a scholarship from Morocco and Senegal to study at Faculté des Sciences Semlalia Morocco in Science and Physics field where i went for technologies section. I got my diploma and i got a job for a digital company where i worked for 5 years. After a while i started thinking for a change.

-How did you started with Pulse Digital?
A friend of mine was already working for Pulse when he contacted me. He was the only and first collaborator they had at the time in 2013. We were first pioneers and the road was rough. He talked me up to Mehdi so i joined him. He left and i stayed. Why? i have no idea. I would be lying if i said, i believed of a bright future. I simply couldn’t leave a start trying to start. I joined Pulse Digital in 2013, the work was weird and insane. We used to work from home because there was no office at that time. Nothing was conventional or professionally conservative. It seemed like a joke and there was all signs to leave. I needed money and a better job but i couldn’t leave because everything would have fell down without a doubt. We were in a phase were we had to work very hard and not think at all. We couldn’t expect anything yet from all the work. We were heating up the emptiness. I wasn’t worried if we were to get anything from all the efforts. I simply thought; i’ll go along with this till a miracle shows up. I remember times were they were so badly struggling and none of us could see any light coming from this long tunnel. A lot of projects were on hold for lack of collaborators. I couldn’t define what i what tasks were really. I was simply avoiding any perforation to happen. I was literally working on everything and the goal was to deliver quick and as efficient as we could. In 2017 Youssef Soulaim became Mehdi’s Partner and they took an office. A real office came out from the womb after 5 years of struggle. 2017 turned out to be fruitful, we jumped from an « empty Shell » to 10 people in the team and we moved to another bigger office. The storm quieted down and there started a real temptation for a future. 2018 – I realized how i did well staying around, I was already proud of the achievements. The past seemed like a candle at great distance: too close to let you quit, too far to comfort you. I knew that we could do much more. It’s only the beginning of greatness. I witnessed dark and bright moment in here, one sure thing; these team would always make it through. It’s passion!

-What’s your job at Pulse ?
I m a project manager and Front developper . I take care of validation and integration, development and planning tasks for the team. Now i have to leave for Senegal; my home town but i’m not leaving Pulse. The plan would be to work for Pulse from Dakar and manage the collaboration of both moroccan and swiss teams.

-How do you see Pulse growing ?
Pulse has been the best professional experience i have ever had since i started working. From here, you could tell how bright i see its future.
We haven’t been talking about the future much, since i started. Most of the discussions and concerns we had were about where the fruitful work was and let’s go get it. It has now been 6 years working at this firm and the future seems to work for its own profit without counseling us really. I say Pulse is doing a great job at the present moment. Present is the only material for the future to operate and they’ve got the best going on right now.

One thing left to say, i will miss the moroccan office so much. We will still be in touch for sure but nothing like being there every day. This was a great chapter – one of multiple upcoming ones…